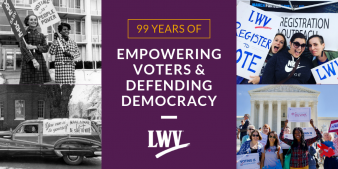 The League of Women Voters encourages informed and active participation in government. We work to increase the understanding of major public policy issues and work to influence public policy through education and advocacy.  The League's primary community efforts include:

We never support or oppose candidates or political parties.

LWVSSMC's Annual Kick-off Meeting was a great success! Our attending members learned about the League's focus for 2019/2020:

In addition, we had a very informative presentation about the 2020 Census by Melissa Vergara -- Fellow, San Mateo County Office of Community Affairs.

Melissa presented the county’s 2020 Census efforts to ensure a complete and accurate count. LWVSSMC is working closely with San Mateo County to ensure that the 2020 Census is a success.

Learn More About 2020 Census - Everybody Counts!
and How You Can Make it a Success

District of Columbia Statehood
The Fight Against Taxation Without Representation

On Thursday, September 19th, the House Committee on Oversight and Reform held a hearing on the Washington, DC Admission Act (H.R. 51)—the first hearing on DC statehood in more than a quarter-century.
More than 700,000 residents live in DC, which is more than the population of Wyoming and Vermont, yet its residents still lack voting members in the U.S. House and Senate. Without these voting members, residents of DC are denied a voice in Congress to defend them from attacks on their own locally passed laws and citizen backed initiatives.
The introduction of H.R. 51 is a historic opportunity to ensure that DC residents are no longer disenfranchised. The legislation would preserve the “federal district” of DC—with its monuments, Capitol building, White House, and the National Mall—while ensuring that the residents and businesses outside of those areas are able to thrive in their communities under home rule.
This is not a partisan issue; it is a human rights and civil rights issue. The people of Washington, DC, deserve the same rights as Americans living in the 50 states. Residents in DC deserve full representation in Congress.

Our League is looking for volunteers in the following areas. These are back-up /apprentice type positions where you would be learning and shadowing for a time. These positions do not have set time frames for service.

IT Support –
We are looking for a person or two to start shadowing our IT support guru. Familiarity with Google Suite would be a plus but she could teach you and be available to advise. Duties would be to manage access to the LWVSSMC Google Suite and make relevant changes under Tech Committee direction.
Please respond to Tracy at president@lwvssmc.org

Audio Visual –
We are looking for someone with an interest in supporting our audio-visual needs; bringing projector and screen, hooking up, and monitoring projection during speaker events, knowing the connectors and cables. We are also looking for advice/consult on an upgraded speaker system with wireless mics. Managing and transporting that will be part of the need.
Please respond to Tracy at president@president@lwvssmc.org

LWV 100th Anniversary – Party and Event planners. We are looking for assistant help for our 100th Anniversary Plans & coordination with other Leagues. Some ideas are: League participation in the RWC July 4thparade, Suffrage Fair on Courthouse Plaza, and more - Let your imagination run wild! Contact Tracy at president@lwvssmc.org.

Last week, a federal district court in Ohio ruled in favor of the League of Women Voters of Ohio, invalidating the 2011 redistricting maps. Read more about this win in the LWV press release - fair congressional district maps. The week prior, another federal district court ruled in favor of LWV Michigan by invalidating the congressional and state legislative redistricting plans in Michigan. Ultimately, both cases were egregious attempts to disenfranchise voters, but LWV is winning in court 5:1, and this is all due to the amazing work Leagues are doing across the country.

The Housing Leadership Council is excited to bring attendees a great selection of workshops, panelists, and speakers such as State Superintendent Tony Thurmond, Assemblymember Marc Berman, and Marie Davis

Celebrating the Power of New Voices for Youth

Join New Voices for Youth for an evening with NV Staff, students, and alums!